The Railroad Commission of Texas has scheduled an open meeting (conference) for Wednesday, May 18, at 9:30 a.m.
To view the webcast visit https://www.adminmonitor.com/tx/rcc/open_meeting.

The Railroad Commission of Texas (RRC) has updated the Frequently Asked Questions regarding Critical Designation of Natural Gas Infrastructure forms.

Two questions and answers have been added based on customer questions received.

No.  ERCOT has pulled the form from its website, and PUCT has confirmed to the Commission that critical natural gas infrastructure no longer needs to utilize the form.

Yes.  Tex. Util. Code § 38.074(b)(1) requires the PUCT to adopt rules that ensure critical customer information is provided to ERCOT in addition to electric utilities. The Commission’s Rule 3.65 references that requirement (as well as the corresponding PUCT rule 16 Tex. Admin. Code §25.52(h)) in subsection 3.65(b)(2) as follows: “A critical customer is required to provide critical customer information pursuant to subsection (g) of this section to the electric entities described in §25.52(h) of this title (relating to Reliability and Continuity of Service) and Texas Utilities Code §38.074(b)(1)…” Additionally, the PUCT’s Critical Infrastructure states that operators may file their critical customer information to ERCOT via email using the following email address: Criticalnatgas@ercot.com.  The Commission encourages all operators to read thoroughly the PUCT’s Critical Natural Gas Infrastructure webpage:  https://www.puc.texas.gov/industry/electric/cng/Default.aspx.

To view the FAQ, visit the RRC website at https://www.rrc.texas.gov/about-us/faqs/faq-regarding-cid-forms/.

The FAQ list is in addition to training videos and webinars, rules, and other resources also available on the RRC’s Critical Infrastructure Division page at https://www.rrc.texas.gov/critical-infrastructure/.

If you have questions related to critical designation of natural gas infrastructure or filing the forms, contact the RRC at CID@rrc.texas.gov. 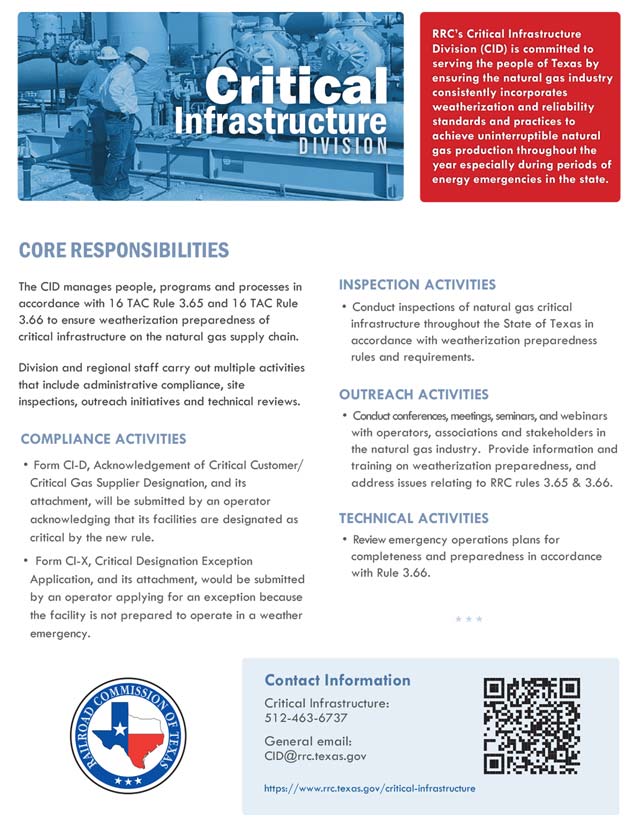 RRC’s Critical Infrastructure Division (CID) is committed to serving the people of Texas by ensuring the natural gas industry consistently incorporates weatherization and reliability standards and practices to achieve uninterruptible natural gas production throughout the calendar year including periods of severe weather.

The CID will vigilantly oversee and manage adherence to weatherization rules, adopted by the RRC, including ensuring companies within the natural gas supply chain register their assets as Critical Infrastructure.

On November 30, 2021 The Railroad Commission of Texas commissioners adopted rules for critical designation of natural gas infrastructure to help protect Texans in energy emergencies. The new rules implement provisions in House Bill 3648 and Senate Bill 3 and define natural gas facilities that would be designated as critical gas suppliers and critical customers.

Senate Bill 3 includes language to allow for certain facilities to apply for an exception to critical designation. However, the newly adopted rules exclude certain types of highly critical facilities from being able to apply for an exception. Examples include any facility that will be on the state’s electricity supply chain map, which is due to be published next year, underground gas storage facilities, pipelines that directly serve a power generation plant or local gas distribution companies, gas wells and oil leases that produce a large amount of gas per day, and gas processing plants. Applications for exception require objective evidence proving reasonable cause and justification, which will be reviewed, and RRC staff can deny an application.